The top Republican in the U.S. House has issued a surprise endorsement of a key marijuana ingredient’s medical benefits as well as the uses of industrial hemp.

“It has proven to work,” House Speaker Paul Ryan (R-WI) said of cannabidiol (CBD) on Tuesday, specifying that it “helps reduce seizures.”

“We do this in Wisconsin,” he said, referring to his home state’s limited CBD law. “That that oil, I think works well.”

The speaker, who is not running for reelection and is retiring from Congress early next year, shared that his own mother-in-law used a synthetic form of cannabinoids, presumably the THC pill Marinol, while dying from melanoma and ovarian cancer.

“That’s off the record,” he said jokingly, referencing TV cameras at the well-attended Kentucky rally where he was appearing in support of Rep. Andy Barr (R-KY), who is locked in a tight reelection race.

Ryan, responding to a medical marijuana question from a woman whose husband passed away, also proactively took the opportunity to speak up in support of industrial hemp.

“And by the way, there’s a lot of industrial uses for hemp that I understand from talking to Mitch McConnell is a big deal to Kentucky agriculture,” he said. “And we’re all in favor of that as well.”

Ryan’s endorsement for hemp comes at a key time. Congressional leaders are currently negotiating differences in the House and Senate versions of the Farm Bill. The Senate proposal contains language championed by McConnell, the GOP majority leader, that would legalize hemp. The House bill has no such provisions.

If the top Republican in either chamber is now vocally in support of ending the prohibition on marijuana’s non-intoxicating cousin, it seems more and more likely that the House will accept the Senate’s hemp language.

That said, don’t count the outgoing speaker as a die-hard marijuana supporter, even when it comes to medical uses.

“Theres no THC in that oil,” he said, even though most CBD preparations do have small amounts of the intoxicating cannabis compound. “That is not medical marijuana.”

In response to the medical marijuana question, Ryan also touted passage this year of the Right to Try Act—which appears to allow certain seriously ill people to use marijuana and other currently illegal drugs such as psilocybin and MDMA, though he did not mention those implications directly.

A new study has some good news for people who fear public speaking—or suffer from acute anxiety in general. The marijuana component cannabidiol, or CBD, seems to help.

The study, published in the Brazilian Journal of Psychiatry, tested how CBD influences anxiety in a simulated public speaking setting, “a well-tested anxiety-inducing method.”

The researchers analyzed self-reported anxiety test results as well as physiological markers like blood pressure and heart rate in 57 male subjects throughout the experiment. Participants received either 150mg, 300mg or 600mg of CBD, or a placebo in the randomized, double-blind test.

Earlier research has demonstrated that CBD can mitigate anxiety in a dose-dependent manner. The present study reached the same conclusion: The impact of CBD on anxiety followed a U-shaped dose-response curve.

Here’s how the experiment worked.

Participants were shown an instructional video and given two minutes to come up with a four-minute speech about public transportation in their neighborhood. Anxiety markers were tested before, in the middle of and after their speeches.

Self-reports about anxiety levels showed that the group that received the 300mg CBD dose “showed lower anxiety levels” compared to the placebo group. Also, the higher (600mg) and lower (150mg) dose “had little or no effect on [public speaking] anxiety, and a significant response was only achieved with an intermediate dose.” 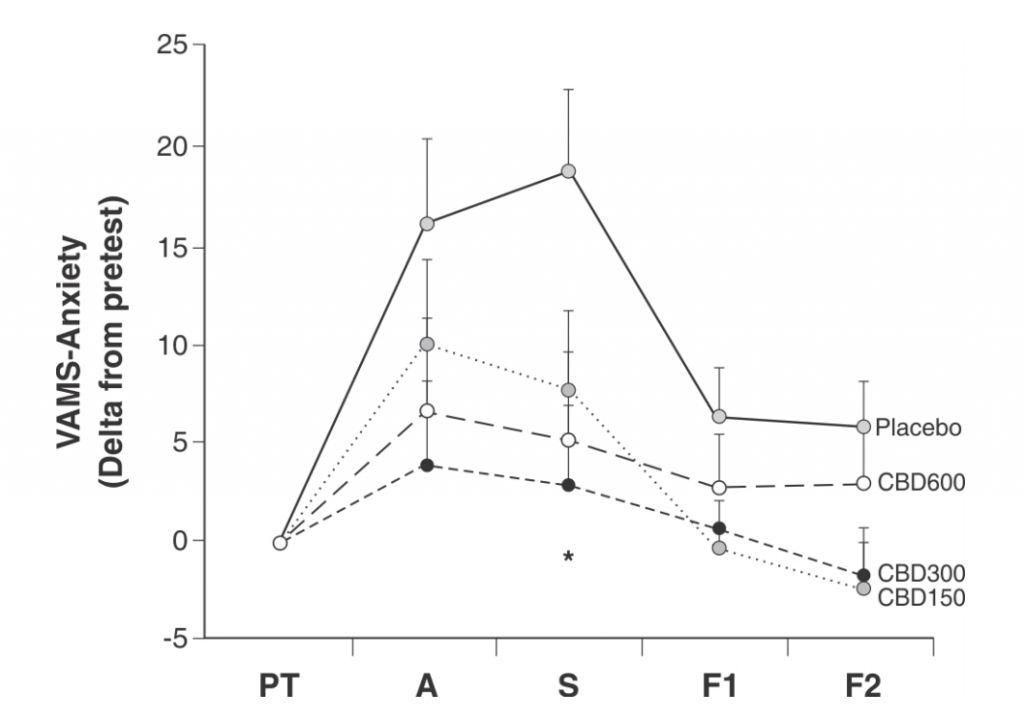 Via the Brazilian Journal of Psychiatry.

“Confirming several preclinical and clinical studies, our results indicate that acute doses of CBD can decrease anxiety,” the researchers wrote.

“In conclusion, we observed again that single acute doses of CBD cause an inverted U-shaped dose-response pattern in human subjects submitted to an experimental model of anxiety,” the study found. “The narrow therapeutic window of CBD makes it difficult to use the drug in clinical settings before rigorous chronic dose-response clinical trials have established optimal doses.”

In February, we detailed the gut-wrenching tale of the Nunez family and their then 2-month-old daughter Amylea. The Nunez family brought Amylea, who was suffering from seizures since the day she was born, to Colorado with the hope that cannabis oil (CBD) could save her life.

After four months of successful treatment, Amylea is now seizure free and the Nunez family has happily returned to their home in Albuquerque, New Mexico. Nunez’s successful treatment was administered by the Children’s Hospital in Aurora, Colorado, and Amylea becomes the latest and youngest child to seek and discover successful refuge from Colorado’s medical marijuana.

It’s both an astonishing and miraculous outcome for a baby that couldn’t even lift her head or leave an intensive care unit for the first months of her life. While she’s not cured, Amylea is alive, and that has her mother Nicole Nunez feeling thankful. Nunez says that

“I mean the day that we left New Mexico, I didn’t know what to expect or if I was going to bring her back home with me.”

While in New Mexico (which has medical marijuana), Amylea will keep consuming the Haleigh’s Hope CBD-rich hemp oil that has helped her survive and now thrive. While she still has trouble using her mouth to eat because the amount of seizures she experience at such a young age make it difficult for her to even grasp a baby bottle.

The family still intends to take visits to Colorado for checkups and treatment while pushing for easier access to this form of medicine in New Mexico. While Amylea may not be “cured” by cannabis in the sense that she still has to live with her condition, medical marijuana has certainly saved another very precious life.

In a study conducted at the Universidad de Cantabria, Raquel Linge and her team performed a study using cannabidiol (CBD), the non-psychoactive seizure-stopping cannabinoid found in marijuana, to treat depression.

Cannabis reacts with different endocannabinoid receptors throughout the brain and body, thus producing different effects, and neuroscientists have witnessed how CBD affects serotonin and glutamate levels. These two neurotransmitters in the brain are what pharmaceuticals often target to treat the biological causes of depression.

The study used a mouse model called OBX that is often used to research depression in humans. It involves removing part of a mouse’s brain to trigger some of the symptoms of depression. The mice with the OBX surgery were compared with normal mice and both were administered CBD. Within 30 minutes, researchers noticed a significant reduction in hyperactivity, which could present as anxiety in humans. Over the course of a week, mice regained their ability to enjoy sugar. This characteristic is often translated into a human’s desire for enjoyment.

In both OBX mice and normal mice, researchers saw an increase in glutamate levels immediately, and they held over the course of the week. The serotonin levels were more subtle, and seemed to hold steady only in mice who had the OBX surgery, suggesting that it was a response based on the conditions of the brain.

There are a wide variety of pharmaceutical options on the market for treating depression, but all of them fall within nine main categories. Depression can have many different biological causes and the variety of treatment options help doctors narrow in on the best treatment for their patients. The promising data from this study suggests CBD could be used as a base for new treatment options. What’s more, the study indicates that the response to CBD was almost immediate, which is not the case for most conventional pharmaceutical treatments that take weeks or even months to balance out and produce desired effects.

by Gooey Rabinski | May 1, 2015 | Cannabinoids, Marijuana Knowledge Base

Among the more than 110 medically therapeutic cannabinoids found in marijuana, the big players are THC and CBD. The influence of CBD-only cannabis oils, which cause no euphoric high, is so great that 13 states have passed limited medical marijuana laws targeted only at CBD extracts.

Products like Charlotte’s Web, an increasingly popular pharmaceutical-grade CBD (cannabidiol) extract from Colorado that’s available in capsule, oil, and tincture form, are being used by patients in several states where they are legal. Instead of activists on bullhorns, the loudest — and most persuasive — voices for at least limited medical cannabis legalization are those of the parents of very sick children.

Children with intractable epilepsy, especially those who have tried all conventional pharmaceutical treatments but gained almost no benefit, are using CBD oil to control seizures with amazing efficacy. Unfortunately, CBD is not an end-all cure. It does not work in all cases.

Charlotte Figi, a nine-year-old Colorado resident, has become the poster child of pediatric medical marijuana. She inspired the creation of a family of CBD-rich Charlotte’s Web products (named by its producer, CW Botanicals, in her honor) to reduce her epileptic seizures. Use of CBD oil has reduced Ms. Figi’s seizure activity by 99.7 percent (before CBD treatment, she suffered between 400 and 1,000 seizures per week).

Benton Mackenzie, a man from Iowa, was suffering from aggressive angiosarcoma, a highly invasive form of cancer. He used high-CBD strains of cannabis to treat his condition — some of which, like Valentine X, provide a 25:1 CBD to THC ratio. For two years, Mackenzie was able to hold his angiosarcoma at Stage 1 though the use of high CBD cannabis.

After being busted for cultivation and incarcerated, where he was obviously deprived of his cannabis medicine, Mackenzie’s cancer progressed from Stage 1 to Stage 4 in only six weeks. Although highly anecdotal, this case is convincing evidence for the power of the CBD cannabinoid to prevent tumor growth and possibly kill cancer cells.

The medical benefit of certain cannabinoids, like CBD, has been clearly illustrated both anecdotally and via limited medical research. The good news is that actual extract products, like Charlotte’s Web, are finally becoming available and legal in many states.

While cannabinoids are typically isolated via extracts, they have also been synthesized by pharmaceutical companies. In fact, the FDA has approved both Marinol (dronabinol) and Cesamet (nabilone), two forms of synthetic THC.

Unfortunately, these man-made products have garnished mixed — and often negative — reviews from patients with multiple sclerosis, epilepsy, and cancer. This indicates that there may be other chemicals and elements available in CBD oil extracts that simply aren’t present in synthetic versions of these cannabinoids. (It is already understood that certain cannabis terpenes play a role in regulating the amount of cannabinoids that reaches the brain.)

Dustin Sulak, an osteopathic physician and advocate of integrative medicine in Maine, succinctly summarized the attitude of the medical establishment toward cannabinoids and whole plant cannabis medicine:

“Many physicians cringe at the thought of recommending a botanical substance, and are outright mortified by the idea of smoking a medicine. Our medical system is more comfortable with single, isolated substances that can be swallowed or injected.”

“Unfortunately, this model significantly limits the therapeutic potential of cannabinoids.”

Think Outside the Box

When considering medical cannabis, one must think outside the box and not constrain the issue to only whole plant cannabis that is smoked, vaped, or used to create edibles.

In the case of children, a cannabis-derived medicine that provides no euphoric high, is easy to administer, and delivers significant relief for some patients is where medical science and nature work in tandem to provide sometimes remarkable efficacy.
​