Even as more states legalize marijuana and more people report using cannabis frequently, rates of dependency are dropping, according to a new study.

The findings came as a surprise to RAND Corporation policy researcher Steven Davenport, who authored the study and expected rates of dependence to reflect the growing prevalence of marijuana use. But the trend held true for every demographic included in the study, with the exception of those 50 and older.

To meet the clinical definition of marijuana dependence, consumers had to experience at least three of the following six criteria:

(Researchers based the definition of dependence on the Diagnostic and Statistical Manual of Mental Disorders IV).

According to data from the National Survey on Drug Use and Health, approximately four million Americans are clinically dependent on cannabis.

But that number seems to be steadily dropping. Far fewer people who consumed marijuana on at least 20 days out of the month say they’ve given up important activities because of their substance use, and the number who say they kept using cannabis in spite of mental or physical health issues declined by seven percentage points, for example. 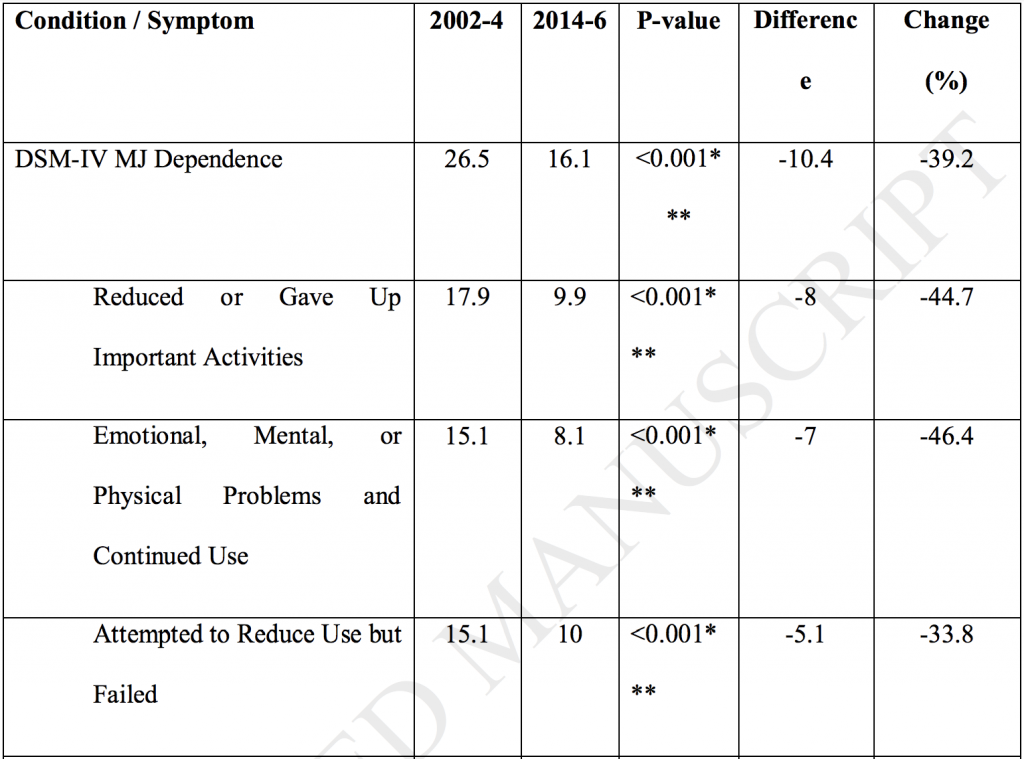 “What may be driving these trends is not entirely clear,” Davenport wrote. “The truth lies between two alternative extreme interpretations.”

On the one hand, it’s possible that the marijuana legalization movement had played a central role in the trend.

The destigmatization of cannabis use may have helped people feel more emboldened to stick to their personal and professional commitments. Greater legal access may also mean that users don’t have to spend as much time seeking out the plant. And another possibility concerns modes of consumption; maybe people aren’t experiencing as many adverse health effects because they’re able to consume using edibles or vaporizers instead of smoking.

But on the flip side, “perhaps the only change has been in users’ propensity to detect problems, attribute them to their cannabis use, and report them—but the underlying risks remain the same,” the study suggests.

The real answer is yet to be determined. Davenport said that the “issue merits further research studying how different state marijuana policies or the use of different marijuana products may affect risks of dependence and other health harms.”

“Policy stakes are high, including not only whether marijuana legalization continues to spread to more jurisdictions, but also how harmful aspects of marijuana are perceived and managed within legalized environments,” he concluded.

Photo by Jessica Zakarya on Unsplash